Update : Somewhere between the Dec 2 patch and now they changed the expansion’s progression to be unlocked. You no longer have to complete Demiplane of Decay to move onto Crypt of Decay and Crypt of Sul. You will just be penalized by a 20 percent HP debuff upon zone in.

Your Achievements window will be the best guide for knowing what to do next.

The flow of events is listed below. Do the tasks in the order shown here with the exception of doing Quellious – Into the Temple First.

Update Dec 2: The Grummus! mission still haunts people’s progression and  we have worked very hard to bring you the latest data on it. While no one  has claimed to know how to drop Grummus’s shield, the info on this site will drop it 75 percent of the time.

Once these are knocked out, it is time to do the Demiplane of Life.

Time to move on to Demiplane of Decay. 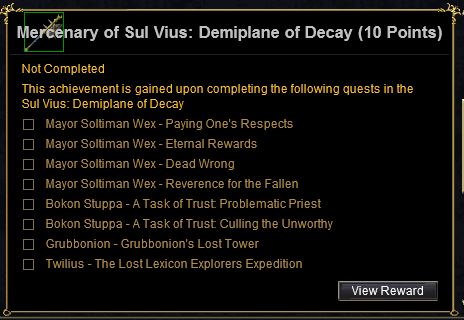 Dec 2, 2015 Update: The devs keep tinkering with Anashti Sul , Damsel of Decay event but I do not know of any groups that actually beat it yet, so they allowed you to skip it; breaking the progression path they first had in place.

Originally you were required to complete Lesser Spirit Armor to enter Crypt of Decay and Crypt of Sul. After the Feb 2016 patch,( possibly the Dec 2 patch ) this is no longer the case and you are free to enter these zones with a health penalty of 20 percent. Completing this task was supposed to negate the 20 percent health penalty. If you skip the previous progression, completing this task does NOT negate the health drop.

The Heroic Adventures are

So to sum it up, one has to complete 24 Heroic adventures.

Feb 2016 update : These 4 missions were reduced in the time needed to complete and difficulty of the mobs.

Time to move on to Crypt of Decay.

Once done in the Crypt of Decay, move on to Crypt of Sul

Once completed, one will be able to request all the entry level raids.